This complex of ancient temples (geographically as large as Paris) is probably the most important archeological site in South East Asia. It is located at Angkor in Cambodia to 5.5 kilometers of the modern town of Siem Reap.

It dates from XII century (although the construction lasted almost 4 centuries) and the main temple is very well conserved and it is still today a religious center. The temple was constructed in the jungle by order from the king Suryavarman as the main temple of the country and its capital city.

This temple is one of the most beautiful and suggestive places on the planet. It is a true feat of the architecture. The temple is a representation of Mount Meru (the house of gods of the Hinduism).

The temple has several towers; there are many courtyards and an endless number of bas-reliefs ornament the walls of its rooms. The architectural style of the temple is known as Khmer Architecture, this style used sandstone and bricks to create the intricate designs that adorn this wonderful temple.

The temple is composed by concentric galleries; Angkor Wat (wat means temple) has three main features: the outer enclosure that surrounded the complex, which is composed by a great outer wall of 1024 x 802 meters and 4.5 meters height and a moat of 190 meters wide, which symbolizes the ranges of mountains and the ocean respectively.

The central structure is composed by several rectangular galleries rising to a central tower, which is over a terrace higher than the city. The temple itself has quincunx (arrangement of five units) towers which represents the peaks of the mountains. This part of the temple has many statues of Buddha and inscriptions of old pilgrims.

The decoration is the other and perhaps the most representative characteristic of the temple. It is composed mainly by bas-reliefs friezes, which represent episodes from the Hindu epics the Ramyana and the Mahabharata; bas-reliefs show also battle scenes like the Battle of Kurukshetra amongst the Kaurava and Pandava clans as well as the “Churning of the Sea of Milk”, the “37 heavens” and many other pictures of the Hindu mythology.

Angkor Wat is dedicated to Vishnu (the supreme god of the Hinduism). According to archeologists like Charles Higham, the sanctuary was built also to serve as a funerary temple for the remains of Suryavarman. The evidence that support this theory is in the bas-reliefs and a funerary jar which was found in the central tower.

The construction of the temple was started in the XII century when the king Suryavarman (1113 – 1150) ruled in the region. The complex was constructed as the state temple as well as the capital of the country.

The status of the temple did not last long time; since in 1177 Angkor was sacked by the main enemies of the Khmer, the Chams. Some time later the empire was rebuilt by the king Jayavarman VII who moved the capital and the main temple of the country to another location a short distance to the north. 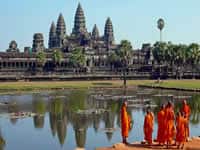 Angkor Wat became a Theravada Buddhist during XIV and XV centuries. From the XVI century the temple lost its importance; nevertheless, it was never totally abandoned.

In 1861 the French scientist Henri Mouhot rediscovered accidentally the remains of the temple and he popularized the temple in the Western Hemisphere when published its travel notes.

The French traveler described the temple using these words: “One of these temples a rival to that of Solomon, and erected by some ancient Michenlangelo might take an honorable place beside our most beautiful buildings. It is grander than anything left to us by Greece or Rome, and presents a sad contrast to the state of barbarism in which the nation is now plunged”.

In 1908 thanks to the popularity that the temple reached in Europe mainly in France; French people funded and managed a great plan of restoration. This restoration is made still today, but it was interrupted during 1980s and 1990s when the Khmer Rouge took the control of the country during a civil war. Fortunately, this violent war did not cause great damage to the remains of the temple.

Today Angkor Wat is probably the greatest symbol of Cambodia , this temple is so very important to Cambodia that its image is part of the country’s flag since 1863. Since 1990 Angkor Wat has experienced a great flood of tourism; mainly after UNESCO declared in 1992 the temple as World Heritage Site.

In 2006 this place received around 675 000 foreign visitors. The money contributed by tourists has served to provide additional funds for the maintenance of the temple and support the economy of the region of Siem Reap in Cambodia.