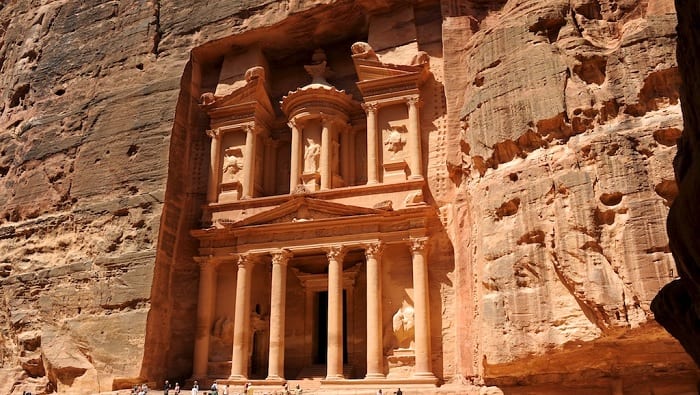 Petra is approximately at 3-5 hours to the south of modern Amman, approximately 2 hours to the north of Aqaba, on the edges of the mountain desert of the Wadi Araba. The city is surrounded by the highest hills of rust by colored sandstone that gives a natural protection to the city against the invaders.

Petra has more than 800 individual monuments, including buildings, tombs, baths, funeral corridors, temples, arched income, and adjacent streets, which especially were carved in the kaleidoscopic sandstone by the technical and artistic genius of their inhabitants. Petra's monuments are best seen by the visitors at early hours of the morning and last hour of the evening, when the Sun warms the multicoloured stones.

The site is semi arid, the friable sandstone which allowed the Nabataeans to carve their temples and tombs into the rock crumbling easily to sand. The colour of the rock ranges from pale yellow or white through rich reds to the darker brown of more resistant rocks. The contorted strata of different-coloured rock form whorls and waves of colour in the rock face, which the Nabataeans exploited in their architecture.

Petra was chosen as the capital of the Nabateans because it was located in a valley surrounded by Sandstone Mountains. There are many ways to get into Petra, but none of them are easy, and if the valleys are sealed, it is almost impossible for anyone to enter.

The main entrance to Petra is called the Siq; it has sides as high as 200 m. This gorge and the temple in the end of it (the Kazneh) were popularized in the movie Indiana Jones and the Last Crusade. Of all 800 tombs carved in Petra, the Kazneh is the most famous. His name Kazneh means "treasure" and comes from the Bedouin belief that the Pharaoh who prosecutes the Israelites concealed his exchequer in the urn in the high of the Kazneh. The fronts of tomb were constructed of the top downwards. The channels were carved in the rock.

The Monastery is the largest tomb façade in Petra, measuring 50 m wide and 45 m high. Despite its name, it was built as a tomb monument and may have acquired its name from the crosses inscribed inside. Like the Kazneh, the structure consists of two stories topped by a magnificent urn.

Archaeologists believe that Petra has been inhabited from prehistoric times. Just north of the city at Beidha, the remains of a 9000-year-old city have been discovered, putting it in the same league as Jericho as one of the earliest known settlements in the Middle East. The Bible tells of how King David subdued the Edomites, probably around 1000 BCE. According to this story, the Edomites were enslaved, but eventually won their freedom. A series of great battles were then fought between the Judeans and the people of Edom. 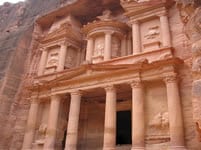 As many as 30,000 people may have lived in Petra during the 1st century A.D. It is a misconception that Petra was a city only for the dead. A large earthquake in 363 A.D. destroyed at least half of the city. Petra never recovered from this destruction.

Petra was seen first when discovered in 1812 after being lost by the 16th century for almost 300 years. The classical name Petra, and the early name Sela both mean the same thing, "Rock"; and surely no city was ever more aptly named. But "Rock" only conveys half the picture of the city; the wild, fantastic shapes of the hills, the great chasms which cleave them, the brilliant colouring all these must be seen to be believed. Petra is unique alike in its antiquities, its natural setting, and its approach.