The Porcelain Tower of Nanjing does not exist now but it was located on the south bank of the Yangtze. It means the “Temple of Gratitude”, also known as Bao’ensi, it was constructed as a Buddhist pagoda, that’s the reason for it’s also known as Porcelain Pagoda, but around 19th century it was mostly destroyed during the Taiping rebellion. However now is under reconstruction once again.

This amazing tower that radiated sunrays and functioned as a center of pilgrimage stands tall among world wonders. It was constructed by the Chinese Emperor Yung Le around 15th century. With 260 feet high octagonal in shape with 97 feet in diameter, the tower was the largest building in China at the time of its construction. It was existed up to the middle of the 19th century.

This Buddhist Pagoda had two damages the first was a bolt of lightning that struck in 180, but the manmade disaster in the shape of Taiping Revolution was detrimental and marked its end. During the period 1840-1850 the rebels took control of the area when smashed the stairs to stop others from using it as a platform, then around 1856 the same destroyed the remaining parts of this marvel in vengeance.

For years the remnants of the structure were lying uncared and recently Chinese Government has started to rebuild its rich ancestry.

The Porcelain Tower in its golden times was covered with superior quality white and shining porcelain bricks interlaid with colored stones. The entire area reflected sunrays in light during days and numerous lights were hung to illuminate the pictures of flowers, animals, landscapes and Buddhist images during nights. Possibly the spiral staircase had 140 steps that matched with the number of lamps that illuminated the outer wall.

When the tower was built, it was one of the largest buildings in China rising up to a height of 260 ft; in addition its octagonal shape has a base of about 97ft in diameter. 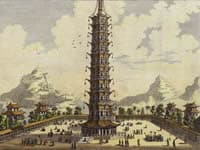 Originally the plan was added more storeys, in a sense only a few Chinese pagodas surpass its height, such as Liaodi Pagoda of 11th century in Hebei or the non-existent 330 ft tall of 7th century in Chang’an.

Designed by the Chinese Emperor Yongle and first discovered by the Western world when European travelers visited it. Since it was listed as one of the Seven Wonders of the World, the tower has seen as a national treasure to both locals and other cultures around the world.

A sublimely elegant example of Buddhist Architecture by those who have seen it in first person and during the early 19th century Le Compte a French mathematician has rightly written “The best contrived and the structure of all the east”, this remark contain all.