The Saladin Citadel of Cairo is one of the most popular tourist attractions in Egypt. The Muqattan hill was once famous for its great views of the city and was fortified by the Ayyubid ruler Salah al-Din to protect it from the Crusaders.

It contains the Mosque of Muhammad Ali perched on the summit of the citadel, so it’s referred as the Citadel of Muhammad Ali. This mosque was built between 1828 and 1848 in memory of Tusun Pasha, the oldest son of Muhammad who died in 1816.

Around 1860s the citadel stopped being the seat of government when Khedive Ismail moved to his newly built Abdin Palace in the Ismailiya neighbourhood. In addition there are two other mosques; Al-Nasir Muhammad and the Suleyman Pasha, first of the Citadel’s Ottoman style mosques.

The Citadel houses a number of museums, ancient mosques and other sides such as Al-Gawhara Palace, the National Military Museum and the Police Museum. This highly visible landmark on Cairo’s eastern skyline reveals a very medieval character when it is viewed from the north (back side).

The area where the Citadel is now located began as the “Dome of the Wind” not as a great military base of operations, it was well known for its cool breeze. Later an Abbasid Ruler fortified the area to protect it against attacks by the Crusaders and since then, it has never been without a military garrison. Originally it served as both a fortress and a royal city.

Using the most advanced construction techniques Salah ad-Din and his successors built an impenetrable bastion in the Citadel around 12th century and for the next 700 years, Egypt was ruled from this hill. 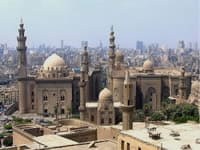 Under the ruled of a greatest Mamluk sultan, Al-Nasir Muhammad tore down most of the Ayyubid buildings to make room for his own needs, which included several palaces, a mosque and barracks for his army. The actual appearance of the Citadel, particularly the mosque that bears his name is the vision of Muhammad Ali.

A legend around this city said that Salah ad-Din hung pieces of meat up all around Cairo, but everywhere the meat spoilt within a day, a exception of the Citadel area where it remained fresh for several days. Non doubt this location provides a strategic advantage both to dominate Cairo and to defend of outside attackers. He carries this custom from Syria where each town had some sort of fortress to act as a stronghold for the local ruler.

Salah ad-Din used the most modern fortress building techniques of that time to construct the original Citadel. The round towers built protruding from the walls so that defenders could direct flanking fire on those who might scale the walls with 10 m high and 3 m thick.

The Bir Yusuf, the well that supplied the fortress with drinking water. Now it’s closed to the tourists. Most of the fortification was built after Sala ad-Din’s rule, the British destroyed much of what existed before there.

Al-Kamil, the nephew of Salah ad-Din reinforced the Citadel by enlarging several of the towers. He made the Blacksmith’s Tower (Burg al-Haddad) and the Sand Tower (Burgar-Ramlab) three times larger, which controlled the narrow pass between the Citadel and the Muqattam hills. Also he built a number of towers (great keeps) around the perimeter of the walls, three of which can still be seen overlooking the Citadel parking area.

Nothing remains of the original fortress except a part of the walls and the well. The Ayyubid walls and their towers were built with the experience from the Crusader wars, and the walls that circle the northern enclosure are 33ft and 10 ft thick. For more than 150 years the Muhammad ‘Ali Mosque has dominated the skyline and it is the most noticeable in all of Cairo.

The mosque has two minarets although Ottoman law prohibited it. Behind gilded mosque, a far more elegant one stands the Mosque of al-Nasir Muhammad, a Mamluk artwork with a beautifully crafted masonry of elegant proportions. Its supporting columns around the courtyard were collected from various sources including ancient Egypt structures. The conquering Ottomans carried much of the original interior decoration off to Istanbul.

Today the Citadel is one of the main attractions in Egypt. Many other wonderful Islamic structures are nearby and a walk from the Citadel to the Khan el-Khalili is a delightful experience.