Cairo is capital of Egypt and considered the cultural and scientific capital of the Arab and Islamic world. The official name of the city is Al-Qahirah which means “the Triumphant”. It was founded by the Fatimid caliphs as a royal enclosure. 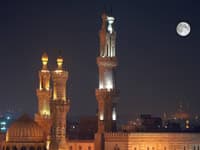 The origin of Al-Qahirah came from the appearance of the planet Mars during the foundation of Cairo City. Over centuries, Cairo grew to absorb other local cities such as Fustat, and the year 969 is considered the “founding year” of the modern city.

The slave soldiers of Mamluks seized Egypt and ruled from their capital at Cairo in 1250 until 1517 when they were defeated by the Ottomans. The French army briefly occupied Egypt from 1798 to 1801 by Napoleon, after Muhammad Ali made of Cairo the capital of an independent empire until 1882. Then the city came under British control until Egypt attained independence in 1922.

The city is located on the banks and islands of the River Nile in the north of Egypt, with a metropolitan area population of about 17.3 million people; Cairo is the sixteenth most populous metropolitan area in the world and the most populous one in Africa. The national day is on 6th of July and its flag carries Al Azhar mosque, a landmark of Egyptian culture and Islamic religion.

The oldest part of the city is on the east of the river where gradually spreads west, engulfing the agricultural lands next to the Nile, these areas are marked by wide boulevards, public gardens, and open spaces.

The older eastern section is different, filled with small lanes and crowded tenements. While the western side is dominated by the government buildings and modern architecture, the eastern half is filled with hundreds of ancient mosques that act as landmarks.

Cairo is an amazing city, full of life and entertainment, on the outskirts the Giza Plateu stands and the most impressive ancient monuments of the world are in this beautiful city, including the Great Sphinx, the Great Pyramids of Giza and a number of the large pyramids and temples.

Today Cairo encompasses various historic and touristic attractions as well as modern landmarks, such as the Saladin’s Citadel, Virgin Mary’s Tree, the Mosque of Amr Ibn Alaas, the Hanging Church and the Cairo Tower.

Cairo provides great culture, art galleries and music halls like Cairo Opera House, and also has some of the grandest accommodations and restaurants in the world such as Four Seasons and the Cairo Marriot.

The city offers a diversity of shopping, leisure and nightlife activities, so shopping ranges from the famous Khan el Khalili souk a bazaar largely unchanged to the modern centres displaying the latest fashions.

Try to realize good buys among spices, perfumes, gold, silver, carpets, brass and copperware, leatherwork, glass, ceramics and mashrabiya. Wekala al-Balaq for fabrics, the Tentmakers Bazaar for appliqué work, Mohammed Ali Street for musical instruments are probably the special places although you probably won’t want to buy, and non doubt the Camel Market makes a fascinating trip, which for thousand years has been a truly a paradise for shoppers.