The religious complex of Karnak on the northern edge of Luxor was the largest religious site of the ancient world, covering around 100 hectares. Its original name was Ipet-isut that means “The Most Select of Places.”

The complex is located on the banks of the Nile River and is after pyramids the most famous archeological place of Egypt. Karnak is an impressive set of temples which were part of the Thebes city, the capital of the Egyptian Empire during the middle Kingdom and the new Kingdom.

The main deity that was adored in Karnak was the Egyptian God Amun whose temple is situated in the center of the complex. The Temple of Montu is located at the north and the Temple of Mut is at the south. In addition to the main temples, there are also several small temples and chapels in the entire complex, such as the Temple of Khonsu, the Temple of Osiris Hek-Djet or the Temple of Opet.

An avenue of ram-headed sphinxes (symbols of the Amun god) leads to the front of the giant first pylon where there is a great statue of the king Ramesses II. The first pylon was never finished and there are near this pylon, some remains of a mud brick ramp, which is the only example that shows how the pylon was constructed.

One of the most impressive parts of Karnak is the Hypostyle Hall, which is located passing through the Second Pylon. This hall is considered one of the most important works of architecture in the world.

The construction of this wonderful hall started during the reign of Amenhotep III and was finished by its grandson the King Ramesses II. All walls, ceilings and columns are painted with the natural earth tones. The roof of the hall is 82 feet (25 meters) high and is supported by 12 papyrus columns set in two rows of six, which are made of sandstone.

Besides, each row of main columns is flanked also by seven rows of 9 columns of 42 feet (12.8 meters) high each one. In total 134 columns compose this wonderful place. The hall is ornamented with reliefs that represent scenes of the Egyptian mythology of the creation. Whereas the outer walls of the Hypostyle Hall are adorned with battle scenes of the reigns of Seti I and Ramesses II.

The third Pylon was constructed by Amenhotep III, in this zone there are also several impressive obelisks such as the obelisk of Tuthmosis I which is 70 feet (21 meters) height and 143 tons weight or the obelisk of Hatsheput (one of the few female pharaoh) that is 97 feet (30 meters) high, weights 320 tons and was dedicated to Amun. The fourth and fifth pylons were built by Thutmose I and they are smaller than the third pylon.

Karnak is a marvelous place that you can visit from 6:30 am to 5:30 pm. Admission costs LE 20 for foreigners and LE 10 for foreign students. There are guided tours available in several languages. 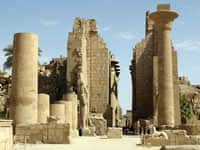 Karnak was part of the ancient city of Thebes which was the capital and the cultural center of the Egyptian Empire. The complex of Karnak was during a long and continuous time the main religious site of Egypt.

Nevertheless, the temple was abandoned during short time when the pharaoh Akhenaton took the power and decided to abandon the worship to Amun and replace it for the worship to the Sun God Aten; then he constructed a new capital and new temples. But, after Akhenaton’s death, the worship to Aten was forgotten and the Theban priests destroyed all the signals of the Aknhenaton reign and the Sun’s worship. Then, Karnak became again the religious center of Egypt.

In the IV century BC when the Greeks conquered Egypt, they moved the capital of the Kingdom to Alexandria marking the beginning of the end to the religious center. However, the site was even respected even in the Ptolemy Dynasty and in the early Roman time.

But, in 323 AD Constantine the Great recognized the Christian religion and in 346 AD the Emperor ordered to close all the pagan temples. Then the Karnak complex was abandoned and four Christian churches were established within the enclosure of the complex.

During the Medieval Age, the ancient Egyptian culture was forgotten and even the location of Thebes was unknown. Only in the XVI century a Venetian traveler described the complex of Karnak. Later several travelers wrote chronicles about Karnak and other important sites of the ancient Egypt during the XVII and XVIII centuries, until 1798 when Vivant Denon a scientist member of the Napoleon’s expedition described the complex with detail.

Today Karnak is after the pyramids the most famous and visited place of Egypt. One of the most impressive examples of the greatness of the ancient country of the pharaohs and a great source of information for archeologists from all the world, who search answers about the still mysterious history of the great Egyptian civilization.