The Victoria Falls is called “Mosi-oa-Tunya” by the local people, the smoke that thunders, and constitutes one of the best spectacular natural wonders of the world.

With its 1708 meters wide became it in the largest curtain of water in the world also by its remarkable falls. The waterfall is situated in southern Africa on the Zambezi River between the countries of Zambia and Zimbabwe.

It boasts of being the largest waterfall in the world with the most unusual in form and having the most diverse and easily seen wildlife of any major waterfall site.

The Victoria Falls still inspires visitors as it did with David Livingstone in the 1860s. The falls and surrounding area of this remarkable preserved natural state have been declared National Parks and a World Heritage Site, thus preserving the area from excessive commercialization.

During the flood season from February to May is impossible to see the foot of the falls and most of its face, and the walks along the cliff opposite it are in a constant shower and shrouded in mist. The minimum flow occurs in November.

Two cities are part of Victoria Falls: at the eastern end of it, Victoria Falls town in Zimbabwe lies on the southern bank of the Zambezi River and at 18km south of town, Victoria Falls Airport has international services to Johannesburg and Namibia.

The second city, Livingstone in Zambia is a historic colonial city and tourism centre for Victoria Falls lying 10km south on the Zambezi River. Its airport has connections to Lusaka and Johannesburg in South Africa. 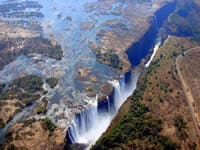 Mosi-oa-Tunya National Park in Zambia is an UNESCO World Heritage site along is twinned to the Victoria Falls National Park in Zimbabwe. It covers 66km2 from below the falls in a north-west arc along about 20km of the Zambian river bank.

Both Parks contain abundant wildlife including sizable population of elephant, buffalo, giraffe, zebra, vervet monkeys, baboons and a variety of antelope. Lion and leopard are occasionally seen. The river above the falls contains large populations of hippopotamus and crocodile. Klipspringers and clawless otters can be glimpsed in the gorges, but they are mainly known for 35 species of raptors.

The Taita Falcon, Black Eagle, Peregrine Falcon and Augur Buzzard breed there. Above the falls, herons, Fish Eagles and numerous kinds of waterfowl are common. The most notable aspect of the area's vegetation though is the rainforest nurtured by the spray from the falls, containing plants rare for the area such as pod mahogany, ebony, ivory palm, wild date palm and a number of creepers and lianas.

Some activities can be undertaken such as the “Flight of Angels” providing an superb vista of the falls, the upstream river and its many islands. For more adventurous the “Microlighting” with stunning views of Victoria Falls. Rafting is the most popular adventure. Visitor can also kayak, canoe, go on guided walking safaris, ride on horseback and lunch on Livingstone’s Island.

The Devil´s Swimming Pool is a famous feature naturally formed, near the edge of the falls, accessed via Livingstone Island. People can swim as close as possible to the edge of the falls without continuing over the edge and falling into the gorge due to a natural rock wall that stops their progress despite the current.