Rio de Janeiro Harbour is located on the south-western shore of Guanabara Bay, which is surrounded by the city of Rio along a strip of land between the Atlantic Ocean and the mountains: Sugar Loaf Mountain, Corcovado Peak, and the hills of Tijuca. The harbour was formed by the Atlantic Ocean which wore out the soil and rocks along the coast.

The naked and lopsided mountain called Pao de Acucar evoked the sugarloaves fashioned on the island of Madeira, guarding the entrance to the bay. The highest mountain was called Corcovado “the hunchback” due to its humped profile. Nowadays a statue of Christ the Redeemer crowns the 2,300 foot-high peak.

The geology of this amazing place is admired by people who said: “God made the world in six days and on the seventh, he concentrated on Rio”. Its climate is wonderful and the beaches are free to everyone. 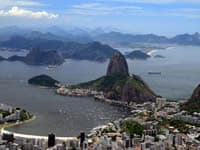 Portuguese explorers named the Harbour of Rio de Janeiro as “the River of the First of January” because they were convinced that they had reached the mouth of a great river, when they gliding toward a narrow opening in the coastline on the New Year’s Day, 1502.

They found beyond this entrance lay a body of water stretching 20 miles inland. French established a colony in 1555, but were expelled, so the population increased and the city grew larger. In 1960, the capital was changed to Brazilia.

Tamoio people named Guanabara or the “arm of the sea” so nearly five centuries later, both the native and European names persist. The large waterway was not a river; it was an island-studded bay that holds a roaring metropolis.

In the past, it was a tropical wilderness teeming with tapirs and jaguars. And now, instead of caravels and dugouts, super-tankers and yachts glide across the magnificent balloon-shaped harbour of Guanabara Bay.

Today, the Harbour of Rio de Janeiro and the beaches are crowded and in some instances are polluted, but the natural beauty of Brazil’s mountains by the bay is unquestionable.