Parícutin is a cinder cone volcano in the Mexican state of Michoacán, close to a lava-covered village of the same name. It is part of the Michoacán-Guanajuato Volcanic Field which covers much of west central Mexico.

Dioniso Pulido, a Tarascan farmer, along with his wife and their son witnessed the initial eruption of ash and stones first-hand as they plowed the field, that began as a fissure in his cornfield.

Much of the volcano's growth occurred during its first year, while it was still in the explosive pyroclastic phase. Nearby villages Paricutín (after which the volcano was named) and San Juan Parangaricutiro were both buried in lava and ash; the residents relocated to vacant land nearby.

After one year, the volcano had grown 336 meters tall, for the next eight years it would continue erupting, but the activity would slowly decline. In 1952 the eruption ended and Parícutin went quiet, attaining a final height of 424 meters above the cornfield from which it was born. Like most cinder cones, it is a monogenetic volcano which means that it will never erupt again.

Parícutin is the youngest of more than 1400 volcanic vents in the Trans-Mexican Volcanic Belt and North America. Three people died as a result of lighting strikes caused by the eruptions, but no deaths were attributed to the lava or asphyxiation.

During the active phase of Parícutin volcano, shots were included in the film Captain from Castile by the 20th Century Fox’s, released in 1947.

Actually two different elevation are attributed to Paricutín: 3170 meters by the Smithsonian Global Volcanism Program and SummitPost.org and 2774 meters by Peakbagger.com and Bartleby.com along with GPS measurements on Google Earth.

The most recent volcano formed on the Western Hemisphere, from its birth of the eruption between 1943 and 1952, it has represented a dramatic period in the lives of Parícutin people, who losing crops, livestock and suffered substantial property damage during the natural disaster.

On the afternoon of February 20,1943, the farmer Dionisio Pulido in the state of Michoacán was readying hid fields for spring sowing , when he felt a thunder and the ground nearby opened in a fissure about 150 feet long.

He recalled later, “the trees trembled, and is was then I saw how, in the hole, the ground swelled and raised itself 2 or 21/2 meters high, and a kind of smoke or fine dust–gray, like ashes–began to rise, with a hiss or whistle, loud and continuous; and there was a smell of sulphur. I then became greatly frightened and tried to help unyoke one of the ox teams” 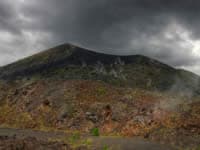 A volcano was being born under the farmer’s feet, Pulido and the other witnesses fled.

The next morning when he returned, the cone had grown to a height of 30 feet, hurling out rocks with great violence, and during the day the cone grew another 120 feet.

At night incandescent bombs blew more than 1000 feet up into the darkness, and slaglike mass of lava rolled over Pulido’s cornfields.

Around the world the volcanic eruptions are commonplace, but the birth of an entirely new volcano of a distinct vent from the magma chamber, is genuinely rare. In historic times only two new volcanoes have appeared in North America, one of them Jorullo to west of Mexico in 1759. And 183 years later Parícutin was the second.

Both rose in an area called Mexican Volcanic Belt which stretches about 700 miles from east to west across southern Mexico. The eruptive activity created a high and fertile plateau due to a layer of volcanic rock was deposited on it, according to geologists. This belt is the most populous region in Mexico during summer months.

Some 300 earthquakes shook the ground, a day before the volcano began to erupt, on February 19. Three days later with the cone rising and fiery skyrockets, the first of many geologists who would monitor and map Parícutin’s behaviour over the next nine years arrived.

During the first year of violent, explosive growth and change, the cone topped 1100 feet fourt to fifth of its final height and almost all vegetation was destroyed due to the ash snowed on the city. Finally the lava destroyed the nearby villages, the next year to the most violent period, but most villagers had seen their livelihoods disappear long before that.

Lava flows continued with little interruption over the next years, and almost exactly nine years after Parícutin was born, the volcano experienced its last major spasm of activity on February, 1952. By then, villages and farms had been relocated with government assistance.