The Grand Canyon more than an awe-inspiring view, is a colourful, steep-sided gorge carved by the Colorado River in northern Arizona, United States. The canyon is a great chasm carved over millennia through the rocks of the Colorado Plateau.

It contains one of the first national parks in the US. President Theodore Roosevelt was a major proponent of preservation of the Grand Canyon area, visiting on numerous occasions to hunt mountain lion and enjoy the scenery.

The canyon was created by the Colorado River over a period of 17 million years according to the research released in 2008. With 446 km long, ranging in width from 6.4 to 29km and attaining a depth of more than 1.6 km.

Six million years ago, the canyon started from the west, then another formed from the east, and the two broke through and met as a single majestic rent in the earth, it merger apparently occurred in the area known as the Kaibab Arch.

The area was inhabited by Native Americans who built settlements within the canyon and many caves. People considered it as a holy site. The first European, García López de Cárdenas arrived in 1540. In 1869, Major John Wesley Powell with a thirst for science and adventure, made the first recorded journey through the canyon as “leaves in a great story book”.

The Grand Canyon offers to visitors, amazing vistas on the rim which mean an unmatched throughout the world. In spite of not being the deepest canyon in the world, is known for its overwhelming size and its intricate and colourful landscape.

These thick sequences of ancient rocks are beautifully preserved and exposed in the walls of the canyon. Also the Grand Canyon National Park is one of the world’s premier natural attractions with around five million visitors per year.

Colorado Plateau has been created by the movements of sediments thousands of feet upward. The higher elevation has resulted in greater precipitation in the Colorado River drainage area, but still not enough to change the semi-arid characteristic. The uplift of the Colorado Plateau is uneven, and the north-south trending Kaibab Plateau that Grand Canyon bisects is over a thousand feet higher at the North Rim than at the South Rim.

In addition the best views of the expanse of the canyon are from the North Rim, so temperatures and lower because of the greater elevation, but heavy rains are common on both rims during the summer months. The uplift has steepened the stream gradient of the Colorado River and its tributaries which has increased their speed and thus their ability to cut through rock due to the great depth of the Grand Canyon. During the ice ages, weather conditions increased the amount of water in the Colorado River drainage system.

Approximately 5.3 million years ago the Gulf of Californian changed the base level and course of the Colorado River when it opened and lowered the river’s base level. About one million years ago, volcanic activity deposited ash and lava over the area, which at times completely obstructed the river, but these volcanic rocks are the youngest in the canyon.

Some of them descended some one third of the way into the Canyon, but they were forced to return because of lack of water. It is speculated that their Hopi guides known routes to the canyon floor but they must have been reluctant to lead them to the river. Afterward, no Europeans visited the Canyon for over two hundred years. 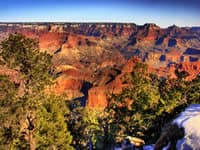 In 1776 Francisco Atanasio and Silvestre Vélez, two Spanish Priest, with a group of Spanish soldiers, explored southern Utah and travelled along the North Rim of the Canyon searching a route from Santa Fe to California in Glen and Marble Canyons. So they eventually found a crossing at present-day Lees Ferry.

At the same year Fray Francisco Garces tried to convert an Indian group and spent a week near Havasupai.

In the 1850s Brigham Young gets to make good relations with local Native Americans and white settlers, he discovered Lee’s Ferry then he acted as a diplomat between Powell and the local native tribes to ensure the safety of his party. In 1858, John Strong Newberry probably was the first geologist to visit the Grand Canyon.

There was an interest in the region by its promise of mineral resources, mainly copper and asbestos in the late 19th century. Early residents soon discovered that tourism was destined to be more than mining so many of the early tourist accommodations were not much different than the mining camps from which they development.

In 1901 the railroad was extended from Williams, Arizona to the South Rim, and the formal tourist facilities increased dramatically. By 1905, a world class hotel on the canyon's edge, the El Tovar Hotel stood where it does today. The Fred Harvey Company, known throughout the west for hospitality and fine food, continued to develop facilities at Grand Canyon, including Phantom Ranch, built in the Inner Canyon in 1922.

On March 5, 2008 the federal officials started a flood in the Grand Canyon in hopes of restoring its ecosystem, which was permanently changed after the construction of the Glen Canyon Dam in 1963.