Palau is an Island nation in the Pacific Ocean composed by around 343 islands, whose surrounding seas and coasts are considered a wonder of the Underwater World. Palau is one of the greatest diving spots of the Earth. It is located to the southwest of Micronesia to 800 Kilometers (around 500 miles) of the Philippines.

In 1989, the Palau aechipelago was ranked by the ecologist organization CEDAM (Conservation, Education, Diving, Awareness and Marine-research) as one of the Seven Underwater Wonders of the World. Palau also known as Belau is an amazing coral reef which was shaped around two million years ago. The geology of the zone is quite diverse.

The northern zone of Palau is composed by two atolls, whereas the biggest island “Babeldaob” has volcanic origin and some of its highest places are over 700 feet (214 meters) over sea level.

Despite, the corals of Palau are not the biggest of the world; they are probably the most beautiful and diverse. Besides, the great spectacle of biodiversity is easily visible in the clear water with visibility exceeding 200 feet (61 meters).

It highlights the corals of the Ngameli Island, whose coral gardens own a beauty that any garden made by men can not match. These wonderful corals resembling pretty plants and flowers have all possible combination of colors, they are simply fascinating.

According many scientists Palau is the most biologically diverse coral reef of the world. Sea biologists have found 700 coral species and over 1500 fish species in the reefs of Palau.

Palau is famous also by its marine lakes and fresh water, the island has around 80 marine lakes, each of these lagoons hide a beautiful living world, which is not found any where else in the world, one of the most famous is the Jellyfish lake, an amazing marine lake which was isolated during millions of years and which has an impressive jellyfish population.

Nevertheless, these jelly-fish are not dangerous; swimmers can swim free in the lake without scare of getting stung. This is because the jelly-fish evolved without predators (like turtles), therefore their stings got atrophied because of disuse.

Another paradisiacal zone of Palau is the “Blue Corner”, a beautiful place where the stream is swift and deep blue waters charm visitors, nevertheless, most corals in this zone are dead, therefore Blue Corner is inhabited mainly by manta rays and eagle rays. The sharks and jacks are also very common in this place.

The “Rock Islands” are other famous landmark of Palau. These islands are a set of foliage covered islands, which seem to float above the sea water. At the Rock Islands, visitors can find beautiful and quiet sand beaches, as well as a marvelous underwater water adventure, diving amongst the beautiful and colorful corals and the remains of wrecks of ships of the World War II.

The Palau islands are a group of volcanic islands originated several million years ago by the volcanic activity in the Pacific Ring of Fire. The impressive coral reefs of Palau started their growing, short time after the formation of the archipelago. 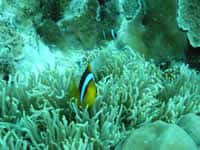 The first polyps colonized submerged volcanic mountains and produced a sedimentary material like cement, step by step each generation of coral polyps was creating an external skeleton around their soft bodies.

These skeletons were used by the next coral generation which created a new skeleton. This continuous process built the wonderful coral reefs which we can see today.

It believes that first human inhabitants of Palau arrived around 2000 BC from the current Indonesia. In 1543 Europeans discovered Palau when the Spanish explorer Ruiz Lopez Villalobos arrived to the region. Palau was under Spanish control by long time, but the island received also influences from Great Britain and Germany, mainly from the XIX century.

In 1899 Germany made a treaty with Spain to purchase several islands in the region including Palau, therefore Palau became a protectorate of Germany. The German government sent several scientists to study the region.

During the first half of the XX century, the island received a great influence of Japan until 1935 when the island became part of the Japanese Empire, being one of the main military bases of Japan in the World War II. When United States defeated Japan the island passed formally to USA. Finally Palau declared its independence in 1981.

Palau thanks to its impressive underwater wealth is visited today by many tourists, most of them are divers; nevertheless the island attracts also several historians, archeologists, hikers amongst other.

The island owns a very sensitive ecosystem, which must be protected; since, it can be easily destroyed by great waves of tourists; therefore some recent laws forbids the construction of any building in this natural paradise. Palau is one of the most wonderful places of the planet and also one of the places that must be more protected.