Wave Rock is without doubt one of the most awesome and beautiful rock formations of the world. This real nature wonder is located 3 Kilometers east of the town of Hyden in Western Australia, and around 350 Kilometers south east Perth. It lies within the region known as Australia’s Golden Outback.

Wave Rock is 15 meters high and almost 100 metres long. The face of Wave Rock appears ready to crash onto a pre-historic surf, which was frozen in the time.

The rock is composed by grey and red granite strips. According to geologists, the particular shape of the rock was formed by subsurface chemical weathering followed by removal of the soft weathered granite by fluvial erosion; this weathering occurred below ground level before it was exposed.

The colours of the rock were produced by the rain chemical deposits (carbonates and iron hydroxide) down the face, forming vertical stripes of greys reds and yellows. It is an interesting and nice spectacle to see how the rock changes its colors along the day, producing awesome views.

Nevertheless, Wave Rock is not the only impressive formation of the zone. Wave Rock Reserve has also many other nice formations such as King Rocks, The Humps, The Hippos’s Yawn and the Mulka’s cave (a bat’s cave).

All these places are amazing natural wonders and have a great importance to the aborigine culture; since, they are associated to ancestral stories that native people have conserved during many generations; therefore, Wave Rock is also the site of beautiful Indigenous rock art.

According to scientists, this stunning stone formation is 2700 millions years old. Wave Rock is part of the north face of remnant Hyden Rock, which is an inselberg (an isolated hill, knob, ridge, outcrop, or small mountain that rises abruptly from a gently sloping or virtually level surrounding plain) made up of variably textured, medium and coarse-grained porphyritic granite (igneous rock with embedded crystals). 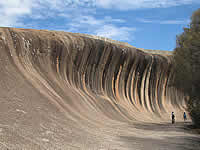 Because of its peculiar shape; Wave Rock has been an important spiritual center for the aborigine Australian people since immemorial times; therefore, there ancient vestiges of human presence around the rock.

In addition to the amazing rock itself and the fantastic aborigine stories about this geologic marvel. Wave Rock has as attraction the diverse wildlife that hosts; since, Wave Rock is surrounded by Wave Rock Park; which is composed by around three hectares of native bushlands that offers a real haven for the native and exotic animals and plants that live in this fascinating area.

Hundreds of kangaroos, emus, wallabies, koalas, wombats, lizards and many kinds of birds inhabit the environs of the rock.

Near to Wave Rock is the aptly named Wave Rock Dam, an impressive dam which was initially constructed in 1928. This dam was expanded in 1951, to service the Hyden Township and its capacity is 30 megalitres (30 000 cubic meters). The dam has low walls, which have been constructed on Wave Rock to channel the rainwater into the dam.

So far this dam system has shown to be very efficient; bearing in mind the small catchment area of only 30 hectares and the low annual rainfall rate, which is only 337 mm. Recently the famous Wave Rock has attracted many tourists and currently it receives around 100 000 visitors per year, being one of the favorite Australian tourist destinations.