Pisa is a very small city with around 100,000 inhabitants in the Tuscany region in Italy. The medieval historical center is near to everything you will need, or want to go: shopping, hotels, university, center of town, leaning tower among others; walking shorts distance to everything else.

The origins of the city are unknown but it lies at the junction of two rivers, Arno and Auser, but now are disappeared, in the Ligurian Sea forming a Laguna area. Archaeological remains from the 5th century confirm the existence of a city at the sea. 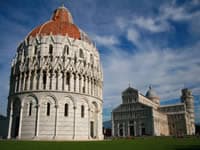 The maritime role of Pisa was prominent because the ancient authorities ascribed to it the invention of the rostrum: it took advantage of being the only port along the coast, from Genoa, then a small village to Ostia.

Situated on the banks and by the outlet of the river Arno, it had been one important Republic of Sea and spread its power out to Corsica isle. Its decadence was determined by the rivalry with other cities Lucca, Florence and Genova.

Pisa, an important Etruscan town, it developed into a powerful maritime republic in the 9th to 11th centuries but was crushed by Genova in 1284. Florence controlled the city from 1406 to 1509.

During the later years of the Rome Empire, Pisa not declined as much as other cities of Italy, probably due to its complexity of its river system and its consequent ease of defenses.

A city safely and very pleasant with a weather that is usually very mild, non doubt the tourists during their stay will may enjoy its bars and restaurants or also go to the cinemas.

While the Leaning Tower is the most important masterpiece in Pisa, there is many other works of art and architecture sharing one same area with other important buildings.

In the city’s Miracle’s Square (Piazza dei Miracoli) to the north of the old town center, you can admire the Cathedral and all its artistic estate of 1000 years, such as the Baptistery or Battisterio of circular shape and the Camposanto – the monumental cemetery. The Church St. Maria della Spina is another important monument, recently restored.

Pisa has many other great attractions and amazing characteristics to offer. This city allows tourists to observe in the buildings which have remained through the pass of time and which show the many different époques and artistic currents, such as Romanesque and Gothic among many others. There are several other buildings and interesting areas for visitors to meet in Pisa besides the Campo dei Miracoli.

Towards the south side of the city, tourists can visit two amazing museums: The Museo delle Sinopie and the Museo dell’Opera, offering the chance to observe original paintings and sculpture, of famous artists from many centuries ago.