This wonderful corals reef is the only live collective organism that can be seen from the orbit of the Earth. The Great Barrier Reef is an amazing site of extraordinaire beauty located in the northeastern coast of Australia, where it can find almost all corals species of the world. It is the largest corals ecosystem of the planet and without doubt one of the most beautiful places of the Earth.

This place is named thus; because is an outer reef located along the Australian coast, but with a channel between the continental coastline and the reef whose depth is around 60 meters. This Reef has over 1000 islands, most of them encircled by coral reefs; these islands are the home of a great number of animals and forests; therefore these islands are one of the main attractions of the Great Barrier Reef.

The Barrier Reef is composed by around 9000 islands and 2800 individual reefs, it spreads along 2600 Kilometers, occupying almost 344 400 square kilometers. Each individual reef has a size between 1 and 10 000 hectares. Besides, this marvelous ecosystem hosts also around 400 coral species, 1500 fish species, 4000 kinds of mollusk and several mammals and reptiles endangered such as the large green turtle or the dugong (also known as sea cow).

There is also a great population of birds in the islands. Because of this variety Australia owns one of the richest seas of the world; therefore the country receives every year around one billion dollars thanks to the fishing industry.

The great variety and number of corals in this site is due to the ideal conditions of temperature and light of this region of the planet. The shallow and warm waters (around 18 ºC and 30 meters depth) of the zone combined with the sunshine that illuminates these waters during the entire year provide a perfect environment for the development of corals, which created also an ideal ambient for the other species that inhabit the ecosystem.

The Great Barrier Reef is one of the most beautiful underwater spectacles of the world; therefore is a true paradise to do scuba diving. This activity is also the best way to know the Great Barrier Reef. Diving in this natural wonderful is the opportunity to enter into an amazing universe of color, created by the abundant marine life. The reef looks like an endless set of gardens in bloom under ocean.

Unfortunately like most underwater paradises of the world, the Great Barrier Reef has been affected by the human contamination, which comes mainly of the rivers of the northeastern Australia, which transport to the ocean the remains of the fertilizers and pesticides used by the farmers.

These chemical residues cause the decreasing of the oxygen in the water killing many corals and other species. The over fishing is also a great threat for the balance of the ecosystem.

This natural wonder was born around 18 million years ago. In that time Australia had for first time a coastline with water temperatures that allowed a new range of live, including tropical reef building-corals. 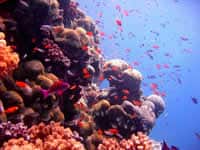 The most important growing period of the corals reefs occurred two million years ago; since then the periodic glacial ages have lowered the sea level several times, this fact caused the exposition of the reef and the massive died of corals, leaving limestone hills instead of the colorful corals reefs.

Nevertheless, once glacial period finished the sea level rises again and new corals polyps form new reefs, completing the life cycle. Many thousands of generations of dead corals, have constructed themselves with their skeletons, walls stones, which were covered by a great variety of new organisms.

The Australian aborigines that arrive to Australia around 40 000 years ago, were the first human that had contact with the Great Barrier Reef. They fished in this zone since ancient times. Nevertheless, the first historical registers about this natural wonder, dates from the XVI century, when a Portuguese expedition reached the eastern coast of Australia in 1522.

Later, several expeditions of different Europeans countries, like the Dutch expedition led by Willem, explored during long time the Australia’s coasts. But, the Great Barrier was really known by Europeans only after June 1770 when the Bark Endeavour which was under rules of the captain James Cook, struck the Great Barrier Reef; therefore the crew was forced to stay 6 weeks in the region where now is the modern city of Cooktown, to repair the ship.

Thanks to this accident, the scientists that composed the Endeavour crew (Daniel Solander and Joseph Banks) had the opportunity to study the Reef. After this voyage, the international scientific community knew the existence of the Barrier Reef.

During the next decades the Barrier was extensively studied by several expeditions led by explorers such as William Bligh, Mathew Flinders or the Hydrographer Philip Parker King, who accurately charted most part of the northern Reef in 1820. Nevertheless, the studying of the Barrier was almost completely abandoned the rest the XIX century and many islands of the Barrier Reef were used as deposits of guano or to built lighthouses.

In 1975 the Australian Government created the Great Barrier Reef Marine Park, whose management is responsibility of the Queensland Government and the National Government. The authorities of the Park have established an administration program that includes management plans, education programs, permits and incentives to protect the Natural Reserve, etc.

In 1981, the Great Barrier Reef was declared World Heritage by UNESCO, became the largest World Heritage area, covering 347 000 square kilometers. It is also considered by CEDAM one of the Wonders of the Underwater World.

In the last decades the Great Barrier Reef became an important tourist destination, mainly to the lovers of the scuba diving. Therefore, many tourist infrastructures has been built along the Queensland coastline to host the almost two million visitors that every year arrived to the zone, turning the tourism, the first economic activity of the region, generating around 5 billions dollars per year. The range of tourist services is very varied; there are boat tours, cruises, helicopter flights, underwater tours, etc.

Nevertheless, the management of the tourism in the Great Barrier Reef is very efficient and is oriented towards tourism ecologically sustainable; since, 20% of the incomes generated by visitors are used to the research and conservation of the Barrier Reef. However, the preservation of this natural paradise is a task that must be constant and it is a task for all people of the World.