Queensland is an Australian state located in the northeastern zone of the country. The coastline of this state is bordered by the famous Great Barrier Reef . Queensland is the second largest state of Australia, occupying almost 1.8 million square kilometers. Queensland is the third most populated territory of Australia with around 4 182 100 inhabitants; most of them are in the south east of Queensland. 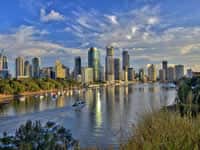 This territory owes its name to the Queen Victoria of Great Britain, who created the state in 1859, declaring the separation of this territory of the New South Wales state.

This territory is also known as the Sunshine State, because of its hot climate during almost the entire year. Thanks to this weather a great variety of flora and fauna inhabit both the land and sea of Queensland. The best example of this natural rich is the world famous Great Barrier Reef, one of the ecosystems most complex of the world and the largest UNESCO World Heritage area of the planet.

Queensland is one of the preferred tourist destinations of Australia, because of its excellent climate, its tropical islands and its pristine paradisiacal beaches. Nevertheless, Queensland is not only beaches and sea; great part of the territory is covered by ancient lush rainforests, natural parks and old towns.

All these magnificent landscapes are the perfect scenery to do a wide range of sports; therefore Queensland is considered the Australian capital of the adventure sports. There are many places, where it can do paraglide, rafting, and surfing, sailing and of course diving.

The climate in the coastline of the state ranges from humid and hot in the northern zone to fresh in the southeast of the state. Nevertheless, climate in Queensland is never cold. In the south, temperatures usually fluctuate between 19 and 26 degrees, with maximum of 28ºC in summer and minimum of 9ºC in the winter nights. While in the north, temperatures can reach 35º C in summer and they decrease until 17ºC in winter.

It believes that first human inhabitants of Queensland arrived around 30 000 years ago. The region of Australia was explored several times by French, Portuguese and Dutch; but only in 1770 the Captain James Cook and the crew of the Endeavour could disembark in the current Queensland territory.

Since then Queensland became part of the New British South Wales colony, the current capital Brisbane was founded in 1825 as a penal settlement for the most dangerous convicts. Nevertheless, the penal settlement only worked until 1839 and the city became permanent civil settlement. Brisbane rapidly was turned an important urban center and the most important port in the northern Australia.

In 1851 the Queensland ‘s population demanded to the British government its administrative independence; therefore Queen Victoria established the new colony of Queensland; which became an auto governed colony, with its own Constitution.

Today, Queensland is a state of Australia whose economy is sustained mainly by the tourism and the mining industries. It highlight the extraction of silver, copper, gold and zinc. The economy of Queesland is the Australia’s fastest growing economy. The region produces also a great variety of agricultural products such as peanuts, bananas, pineapples, cotton, sugar cane, grapes, etc.

Brisbane, the capital of the state is a nice city full of energy, which is the third largest city of the country; where arts and culture have a privileged status. Besides, the city at night is also a vibrant place, full of animated bars and clubs with live music and nice people.

This city is also an ideal place to take as base of a trip through the northeastern of Australia; since, the city offers a wide variety of communication means that includes good roads, airports, ferries, etc. This city offers also a great variety of services for visitors such as great stores, guided tours, excursion that includes scuba diving in the corals reef.

Another important landmark of Brisbane is the Lone Pine Koala Sanctuary, the oldest park of its kind.

The main cities of Queensland are: Townsville, Logan City, Bundaberg, Hervey, Ipswich, Cairms, Rockhampton, Mackay and Toowooba. Each city has its own spirit, conserves a cultural independence of the capital and offers to the visitors all facilities that might wish.

Some of the most popular destinations of Queensland are: Sunshine Coast, Whitsundays, the Currumbin Wildlife Sanctuary, North Queensland, North Stradbroke Island, South Stradbroke Island and of course the Great Barrier Reef. It highlights also Gold Coast a city full of amusement parks, such as Movie World, Sea World, White Water World, Dream World, amongst other.

This region is one of the most beautiful and visited zones of the planet, it offers to the visitors, everything they could expect from Australia.