The entire Tasmania Island is considered a wonder by the Australian people, because of its great and unique natural richness; therefore, Tasmania is also called the “Natural State”, the “Island of Inspiration”, the “Holiday Isle” or the “Island of Rejuvenation”.

Almost a third of the Tasmanian territory is occupied by World Heritages Sites and National Parks. Tasmania is one of the major tourist attractions of the country.

Tasmania owns a wonderfully diverse vegetation, which includes some of the most representative Australian species, such as grazed grassland, evergreen eucalypt, the Huon pine, the Tasmanian Waratah, the Flying Duck Orchid and the Tasmanian Blue Gum (the state floral symbol).

Large areas of the island are covered by cool temperate rainforests and moorlands. Tasmania has some of the oldest trees of the world. There are several tall Huon Pines that are more than 2000 years old. Some of these trees reach 90 meters high (300 feet).

Tasmania has been also home of a great number of unique animal species, such as the Thylacine (Tasmanian tiger), a peculiar marsupial with look of wild dog that was the largest carnivorous marsupial, which was extinct in 1936.

It is mainly a scavenger with a vicious temperament and a loud disturbing growl. Unfortunately, like several other native species, the construction of roads and the presence of vehicles are damaging the habitat of this unique animal, whose population is decreasing dramatically because of the human pressure and a widespread facial tumor disease that is killing most Tasmanian devils.

Some of the most important landmarks of Tasmania are: the Mount Wellington, the Hobart Foreshore, Cradle Mountain, the central Tasmanian Highlands, the Bay of Fires, the Dove Lake, the Bruny Island, the Honeymoon Bay and the Freycinet National Park. Tasmania is also a great destination to practice many recreation activities such as bushwalking, boating, fishing, cycling, surfing and white-water rafting.

Many scientists think that Australia was part of the Continental Australian territory until the last glacial period, which occurred 10 000 years ago. Nevertheless, the first human groups arrived to Tasmania 35 000 years ago, when the island was still joined to the continent.

Later the sea water level increased and Tasmania became an island separated from the current continent. When British people arrived to Tasmania in 1803; it estimates that Tasmania was inhabited by around 10 000 people, a quantity, relatively small.

This aborigine people of Tasmania were divided into 9 ethnic groups; but, only 83 years later, in 1883, the aborigine population was only 300 people and most ethnic groups had disappeared. Most Tasmanian natives died because of the war, violent persecutions and diseases brought by Europeans. 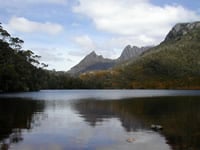 Europeans discovered Tasmania on November 24, 1642, when the Dutch explorer Abel Tasman (whom the Island owes its name) saw the Island for first time. After Tasman, many other European explorers passed by the Island, amongst them the Captain James Cook, one of the most important personages of the Australian history.

Nevertheless, the first European settlement in Tasmania was established in 1803 at Ridson Cove, in order to protect the island against a likely French invasion.

But, the main settlement of Tasmania was established as a penal colony, in a place that later became known as Hobart Town, which was called some years later Hobart, this settlement became the most important city of Tasmania and is currently the capital of the Tasmania State.

Like most places in Australia, Tasmania was early inhabited, during the colonial period, by military guards and convicts. These first colonizers were dedicated to develop the agriculture and other industries in the Island. Traditionally, the main economical activities of Tasmania, have been the agriculture, the mining of iron, tin, copper and zinc as well as the forestry and the production of merino wool.

During the XX century Tasmania became one of the most exotic tourist destinations of Australia. Because of its amazing natural richness; many natural reserves were created in the Island. Unfortunately, in 1967, the island was seriously affected by fires, which destroyed many zones of the Islands, causing the death of many people and natural species, as well as great material losses.

In the 1990s, a declination in the Tasmanian industries caused a migration to the Continental Australia; nevertheless, since 2001 Australia has experienced a great economical prosperity, which has reached also Tasmania.

There are many cheaper air flights and ferries that allow to reach Tasmania from cities, such as Melbourne or Sidney. This great transport offer has contributed to the generation of a tourism boom in this wonderful Island.