The Northern Territory is the Federal territory of Australia that occupies most part of the northern center zone of the country, being its capital the city of Darwin.

This vast state has borders with South Australia to the south, Western Australia at west, the Timor Sea, the Gulf of Carpentaria and the Arafura Sea at north and Queensland at east. This region covers around 1 349 129 square kilometers (520 902 square miles) and is composed by a great tropical region and a substantial amount of desert areas.

The Northern Territory is also one of the best areas to learn about the Australian Aborigines, because, it was amongst the last zones to come into contact with European people, therefore, there are many vestiges of the native culture in this ancient land. 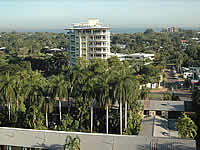 The Northern Territory has two main climates; the northern zone, where it is the Capital Darwin and the Kakadu national Park has a tropical climate, hot and humid with two main seasons: wet and dry.

Most rainfalls occurs between November and April, being from May to October the best time to visit this zone, when the days are warm and sunny with temperatures around 30ºC (86ºF)til 0ºC (32ºF) at night. The annual rate of rainfall is 1200 mm (48 inches) with occasional snowfalls.

The other climate of the Northern region is in the desert, where it can find cities such as Ayers Rock or Alice Springs. This zone is very dry; since, it receives less than 255 mm of precipitations per year.

Besides, it is also very hot, mainly in summer (from December to March), when temperatures can reach 38ºC (100 ºF). Nevertheless, in winter (from June to August), temperatures can decrease until 18ºC (64ºF).

The main economical activity of the Northern region is the mining. This region produces a great number of minerals and petroleum; besides, it generates also a great part of the energy that consumes Australia. The Northern Territory is one of the most prosperous parts of Australia; since, its gross state product per capita is $63548, which is almost $20000 more than the national average of Australia.

Tourism is also an important source of incomes to this region, thanks to famous attractions such as the Kakadu national park or Uluru, which turned the Northern Territory one of the preferred tourist destinations of the country.

The capital of the region, the city of Darwin is a nice city located at the Timor Sea, whose population is around 120 000 inhabitants, being the least populous capital of Australia. It is an important interchange center between Australia and Asian countries such as Indonesia or East Timor.

This city was named thus, in honor to the famous scientist Charles Darwin, the author of the evolutionist theory. This is a vibrant and tropical capital city, perched on a deepwater port, which offers a blend of cosmopolitan pleasures. It also acts as a gateway to key Top natural and cultural attractions. It is also a common base for the tourists that visit the famous Kakadu National Park.

The Northern Territory has an excellent net of roads and highways that allow the transport through the entire region and neighboring states, connecting cities such as Darwin, Alice Springs, Katherine, Jabiru amongst others. Besides there are also train services, like the Adelaide-Darwin Railway, that connects Adelaide and Alice Springs at south with Darwin at north.

The main airport of the zone is the Darwin International Airport, which receives local and international flights; but, there are airports also in cities such as Tennant Creek, Alice Springs and Ayers Rock. The Northern Territory is a beautiful land full of wonders and ancestral culture that worth visiting.