Also known as Ayers Rock, Uluru is an amazing sandstone rock formation that dominates the desert plains at the south zone of the Australian Northern Territory (a federal territory) in the centre of the country to 335 Kilometers (208 miles) from the city of Alice Springs, in the Kata Tjuta National Park.

This marvelous rock is considered a sacred place for the Aboriginal people and is one of the most representative landmarks of Australia; since, it is the largest monolith of the world.

Uluru is an isolated remnant of the erosion of an ancient mountain range, a geological formation known as inselberg (an isolated hill, knob, ridge, outcrop, or small mountain that rises abruptly from a gently sloping or virtually level surrounding plain).

This wonderful monolith is 348 meters (1142 feet) high and around 9.4 kilometers (5.83 miles) length. Uluru is composed mainly of coarse-grained arkose, a kind of sandstone with abundance of feldspar (50%) and some other conglomerates, such as quartz and other rock fragments (basalt, chlorite, epidote, amongst others). The monolith was named thus by the Pitantjatjra natives; nevertheless, this name doesn’t have a real meaning in their language.

However, Uluru holds deep significance to the aboriginal people as evidenced the numerous Aboriginal paintings and sacred rocks that can find at the giant bases of the monolith.

There are several routes to explore Uluru, the most attractive is the route that runs along the 9.4 kilometers of the base, but, this route is very long.; nevertheless, there are other shorter routes, such as the Mala Walk (2 Km) or the Mutitjulu Wlak (1 Km); both routes are very charming and show great part of the beauty and cultural richness of this fascinating place.

Another popular option amongst the tourists to explore Uluru is climbing. Nevertheless, this amazing way is only recommended for people with good physical condition. Besides, climbing in Uluru is only recommendable before 9 a.m.; since, after this time, the high temperatures (over 36ºC) make it almost impossible this activity. The walk lasts around 3 hours and offers several marvelous views of the surrounding landscapes, including the Olgas.

Another great attraction of Uluru is the wildlife around it. Around 150 bird species, 46 native mammal species, many reptiles and a great variety of plants inhabit the Uluru National Park. On the other hand, the beautiful and dramatically changes of color that experiences the rock at sunset explains why Uluru is an ancient sacred place that attracts thousands of tourists every year. Uluru is simply a magical place and a real wonder of Australia.

The rock was originally sand, deposited as part of an extensive alluvial fan that extended out from the ancestors of the Musgrave, Mann and Petermann Ranges to the south and west, around 550 millions years ago, between the late Neoproterozoic and the early Cambrian. The erosion process of the mountain range of the Alice Springs zone continued during the Paleozoic, 350 millions years ago and derived in the stone formation that we can see today.

Uluru was from early times an important religious center for the Australian aboriginal people. Archeologists have found vestiges of human presence; which dates from 10000 years ago. However, the first European explorers arrived to this zone only in 1870, being Ernest Giles and William Gosse, the first white men that arrived to this region of the Australian Western Desert. 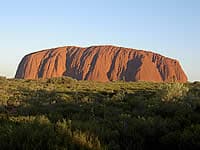 In 1873 William Gosse observed for first time the Uluru monolith and he named it, “Ayers Rock”. The European colonizers tried to establish the pastoralism in this zone during the last decades of the XIX century; without success.

Like in the rest of the country, the new settlements established by the white people caused clashes with native people, therefore, the police activities increased in the Uluru’s adjoining region; but, step by step the native inhabitants also known as Anangu were adopting European customs and habits.

Fortunately, around 1920s, many zones of the country became aboriginal reserves or sanctuaries, which were created to preserve the aboriginal culture. Thus, in 1920 the zone of Uluru-Kata Tjuta National Park, was declared an Aboriginal Reserve, by the Australian Government. Since then the wonderful and sacred Uluru monolith became also an important tourist destination in Australiabecause zones such as Barkly Tablelands or Victoria River offered better conditions to this activity.

In 1958 the Uluru- Kata Tjuta National Park, became administrated by Northern Territory Reserves Board and his name was changed to Ayers Rock - Mount Olga National Park. In 1970s, the government decided to remove all the tourist infrastructure near Uluru and in 1975 a reservation of 104 square kilometers (40 square miles) beyond the northern boundary of the park was established to protect Uluru .

The Park was managed by the Northern Territory until 1985, when the National Government decided to return the management of Uluru to the Pitjantjara Aborigines who manages the park with the National Parks and Wildlife Agency.

Currently, Uluru is a popular destination in Australia that receives around 400 000 tourists per year, number that was increased since this natural wonder was listed as part of the UNESCO World Heritage.

Most of these visitors arrive to the township of Ayer Rock Resort (formerly Yulara), where there is also a Visitors Center that shows the culture of the Anangu people. Uluru owns a magnificence and charm that you can experience, only if you visit it.