Shark Bay is a marvelous place located in the most western point of Australia (Gascoyne), in the federal territory of Western Australia, 800 kilometers north of Perth, being Denham the nearest major town. Shark Bay is currently composed by two bays, several peninsulas and islands, the Shark Bay county and the Shark Bay Marine Park.

Shark Bay has a coastline, which extends around 1500 kilometers and covers an area of 10 000 square kilometers; nevertheless, this region is inhabited only by around 1000 inhabitants. These people earn their livelihood mainly from the tourism, fishing, pastoralism and conservation management.

Shark Bay has a great ecological importance, because of the great number of animal and vegetal species that live here. Besides, this bay is at a location that gathers the three most important climatic regions of the world.

Shark Bay is the home of more than 10000 dugongos (sea cows), an impressive community of dolphins; amongst them the nose bottle dolphins, which use a sponge to protect their beaks when they look for food in the sea ground, being the unique known marine mammal specie that uses tools. Besides, Shark Bay hosts also 26 endangered Australian mammal species, as well as 230 bird species and 150 reptile species.

In addition to, it is also an important zone of reproduction for hundreds of fishes, cnidarios and crustacean, including of course the sharks and rays that give its name to the bay.

Shark Bay has also the largest and most varied area of sea grass of the world; since, it covers about 4000 square kilometers; it highlights the Wooramel Seagrass Bank of 1030 square kilometers. On the other hand, the bay hosts a unique community of microbes (located in Hamelin Pool) that are building stromatolites (colonies of algae which create hard dome-shaped deposits and are amongst the oldest forms of life on earth), which are around 3000 years old.

One of the most important attractions of Shark Bay is Sea World. It is considered the largest man-made lagoon system of the world for sharks. This amazing place exhibits the sea animals that inhabit the zone, using an innovative way, which reflects amongst other themes, the difficult relationship between the sharks and the man along the history.

This place is also an important research center to understand the mysteries and destroy the misconceptions about the most feared predator of the Ocean as well as other many species that live in the sea.

Another famous attraction of Shark Bay is Monkey Mia, a beautiful beach, where people can make contact with wild dolphins like nowhere else in the world. Shark Bay includes several reserves, sanctuaries and protection zones, such as Shark Bay Marine Park, the Françcois Peron National Park, the Hamelin Pool Sea Natural Reserve, the Zuytdorp Natural Reserve, as well as many protected islands.

There are vestiges of human presence in Shark Bay that date from 30000 years ago. According to archeologists, the first inhabitants of this zone, moved to and from the area in response to changing sea levels and the availability of fresh water and food. Shark Bay has a great number of aborigine archeological sites, which belonged mainly to the Nganda and Malgana aboriginal tribes.

Edel land is one of the most important of them; because of the ancient artifacts and tools that were found in this place. Another important archeological place at Shark Bay is a cave on the walk at Monkey Mia; since, in this cave scientists found the remains of numerous marine animals, such as mollusks, cuttlefish, crabs, dugong, turtle and fish. 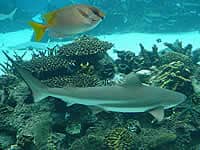 According to the history, Shark Bay was the first point of Australia that was visited by Europeans; since, Dirk Hartog arrived to this zone for first time in 1616.

Nevertheless, this place owes its name to William Dampier, who visited the bay in 1699. Many explorers made studies and collections in this zone during XVII, XVIII and XIX centuries, creating some of the earliest records of Australia’s people, landscape, flora and fauna. Therefore, most islands, bays and beaches of Shark Bay were named in honor to these explorers; amongst them Willem de Vlamingh, Nicolas Baudin, Louis de Freycinet, Henry Mangles, etc.

In the second half of the XIX century, the explorer Frank Gregory mapped the Gascoyne and some years later, the State Government released conditions and terms to encourage pastoralists to take up land. The pastoralism is still today an important activity in the region; since almost all the Shire is used for pastoral pursuit.

The Guano Mining was also a great source of incomes to this zone in the XIX century, mainly at Egg Island. The pearls were also a great business in Shark Bay since 1870s; nevertheless, this activity declined after 70 years; however today, cultivated pearls are growing still in the Shark Bay region.

During the XX century, fishing became the most important activity in Shark Bay. Since 1960s, tourism started its growth and Shark Bay became a great tourist destination, because of nice places such as Monkey Mia (where dolphins come into shore and interact with people).

Shark Bay was declared World Heritage by UNESCO in 1991 and was also the first to be classified on the Australian World Heritage list. Currently, around 150000 tourists visit Shark Bay every year, being considered one of the most wonderful places in Australia.